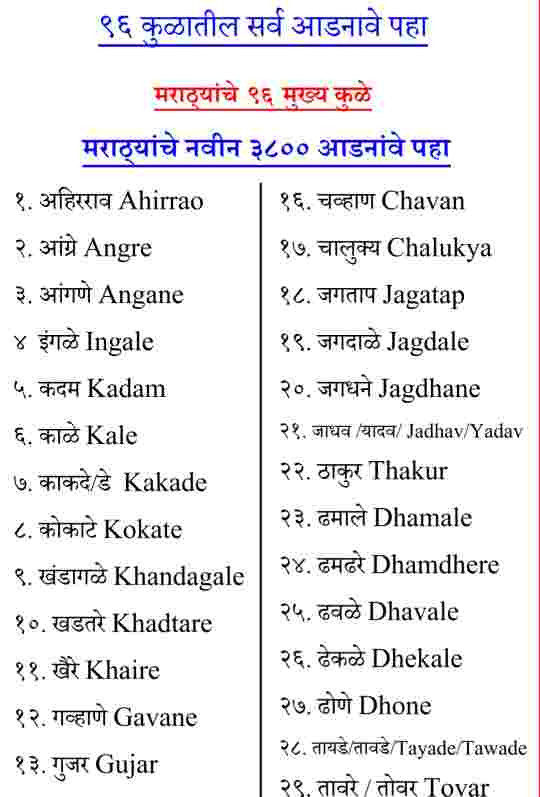 Mainly Marathas reside in the Indian state of Maharashtra. Here you find the Network of Maratha clan system. They are also known as Shahannava Kuli Marathas or 96 Kuli Marathas. If you want to download 96 Kuli Maratha Surname List PDF then click on the link given below.

The Marathas of India played an important role in shaping Indian history. Marathas fought and won against the Muslim powerful emperor Aurangzeb. In the third battle of Panipat, he faced the Afghan invaders with great fearlessness. However, the Marathas were defeated. But still the invaders had to face difficulties due to their valor. Therefore Maratha caste is an invaluable asset for Maharashtra.

It is believed that these 96 Kuli Maratha played an important role in ending the Mughal rule. Kshatriya/Rajput clans from North India also settled in Maharashtra, after which they came to be known as Maratha Kshatriyas or Maratha Rajputs. Apart from this, the Solanki Families who originated from the Chalukyas of South India also already resided in Maharashtra.

Which Surnames come under 96 Kuli Maratha?

Membership of Maratha society is acquired through patrilineal ways. If a person marries only in the Marathas surname, then he is placed in the category of high ranking Maratha, in which he gets various types of rights. Although which surname is included in Maratha and which is not, it is still disputed.

Maratha can be divided into two parts on the basis of caste. The upper class Marathas are called Kshatriyas (warriors). Deshmukh, Bhonsle, More, Shirke, Jadhav etc come under Top Marathas Surname. And the remaining Surnames come under Kunbi Sub-caste. Although this type of caste division existed only till the Maratha Empire.

Many people feel that the person who speaks Marathi. He is Maratha. but it’s not like that. Almost all marathas are Marathi speaking, but not all Marathi speaking people are marathas.