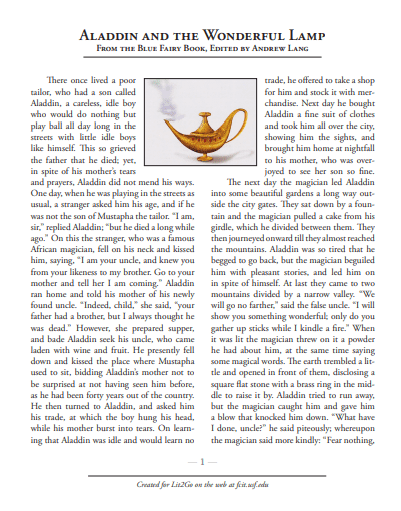 Download PDF of Aladdin and the wonderful Magic Lamp Story

Hello friends, through this post I am going to share with you Aladdin and the Magic Lamp Story PDF. Which is a very good story and you can tell it to your children because most of the young children like to listen to the story. So you can download this story as PDF from below.

Aladdin is a Middle Eastern folktale. The Book of One Thousand and One Nights (The Arabian Nights) is one of the most famous stories. The stories are often toured or accompanied by variations which are a short description of the Burton translation of 1885.

Aladdin is an impoverished young ne’er-do-well, dwelling in “one of the cities of China”. He is recruited by a sorcerer from the Maghreb, who passes himself off as the brother of Aladdin’s late father, Mustapha the tailor, convincing Aladdin and his mother of his good will by pretending to set up the lad as a wealthy merchant. The sorcerer’s real motive is to persuade young Aladdin to retrieve a wonderful oil lamp (chirag) from a booby-trapped magic cave. After the sorcerer attempts to double-cross him, Aladdin finds himself trapped in the cave. Aladdin is still wearing a magic ring the sorcerer has lent him. When he rubs his hands in despair, he inadvertently rubs the ring and a jinnī (or “genie”) appears and releases him from the cave, allowing him to return to his mother while in possession of the lamp. When his mother tries to clean the lamp, so they can sell it to buy food for their supper, a second far more powerful genie appears who is bound to do the bidding of the person holding the lamp.

With the aid of the genie of the lamp, Aladdin becomes rich and powerful and marries Princess Badroulbadour, the sultan’s daughter (after magically foiling her marriage to the vizier’s son). The genie builds Aladdin and his bride a wonderful palace, far more magnificent than the sultan’s.

The sorcerer hears of Aladdin’s good fortune, and returns; he gets his hands on the lamp by tricking Aladdin’s wife (who is unaware of the lamp’s importance) by offering to exchange “new lamps for old”. He orders the genie of the lamp to take the palace, along with all its contents, to his home in the Maghreb. Aladdin still has the magic ring and is able to summon the lesser genie. The genie of the ring cannot directly undo any of the magic of the genie of the lamp, but he is able to transport Aladdin to the Maghreb where, with the help of the “woman’s wiles” of the princess, he recovers the lamp and slays the sorcerer, returning the palace to its proper place.

The sorcerer’s more powerful and evil brother plots to destroy Aladdin for killing his brother by disguising himself as an old woman known for her healing powers. Badroulbadour falls for his disguise and commands the “woman” to stay in her palace in case of any illnesses. Aladdin is warned of this danger by the genie of the lamp and slays the impostor.