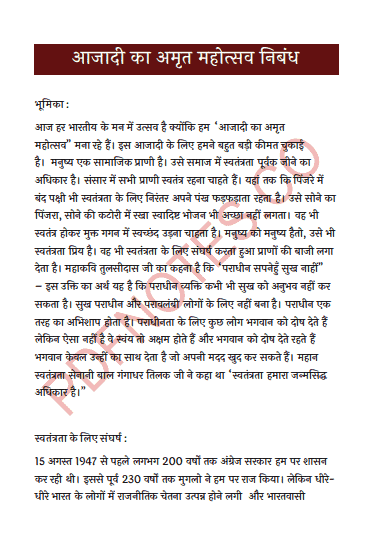 Hello friends, today I am going to share with you “Azadi Ka Amrit Mahotsav” which you can download from the link given below. Apart from this, you will get its PDF in both Hindiन and English languages.

What is “Azadi Ka Amrit Mahotsav” ?

Government of India launched this Program to celebrate 75 years of Independence.

Prime Minister Narendra Modi flagged off a march with 78 participants from Sabarmati Ashram, Ahmedabad to Dandi, Navsari in Gujarat to mark the 91st anniversary of Dandi March on 12 March 2021.

Addressing the program, Prime Minister Narendra Modi dedicated this festival to all the citizens of India as everyone has played an important role in furthering the progress of India, besides making the Prime Minister’s dream of New India 2.0 All the citizens have also taken the responsibility of furthering the goal of Aatmanirbhar Bharat’ successful.

At the same time, he announced that this program will be celebrated as a ‘Jan-Utsav’ with the spirit of ‘Jan-Bhagidari’. “Azadi Ka Amrit” means the elixir of the energy of freedom.