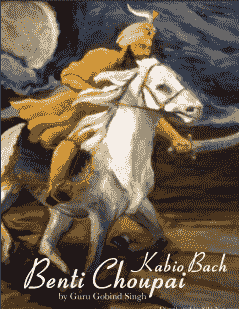 Benti Chaupai (also referred to as Chaupai Sahib) is a hymn by Guru Gobind Singh. Chaupai is the 404th Charitar of the Charitropakhyan of the Dasam Granth and is a part of a Sikh’s Nitnem (daily scripture reading).

It begins after the 404 Chittar where two massive battles, including the later between Maha Kal and the devils, is narrated and the struggle of a goddess that was born as a result of the first battle and her quest for the acceptance of the Supreme Being, by her abandoning all other worldly desires, is illustrated.