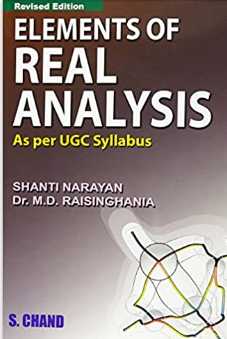 For B.A., B.Sc. and Honours (Mathematics and Physics), M.A. and M.Sc. (Mathematics) students of various Universities/Institutions as per UGC Model Curriculum. Also useful for GATE and various other competitive examinations.

This book is an attempt to present Elements of Real Analysis to undergraduate students,on the basis of the University Grants Commission Review Committee report recommendations and several Universities having provided a course along the lines of these recommendations. This book must not, however, be thought of an abridged edition of the Author’s “A Course of Mathematical Analysis” for M.A. students.

Chapter I provides description of Set of Real Number as a complete ordered field and no attempt has been made to construct the Set starting from some Axioms. Chapter II deals with bounds and limit points of sets of real numbers. Chapter III concerns itself with Real sequences defined as functions on the set of Natural numbers into the set of Real numbers. This is followed by Chapter IV of Infinite Series dealing with mostly convergence tests for positive term series as also a test on alternating series. Chapter V deals with the nature of the range of a real valued continuous function with a closed finite interval as its domain. Chapter VI on Derivability deals with the rigorous proof of Role’s theorem as also of Lagrange’s theorem. Chapter VIII deals with Riemann Integrability.