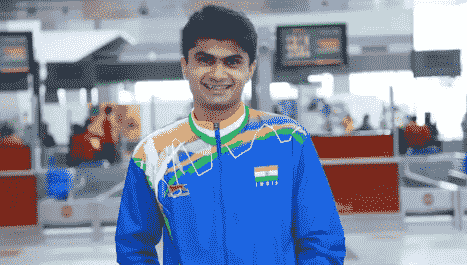 Suhas Lalinakere Yathiraj is currently an IAS officer who got Uttar Pradesh cadre in IAS 2007 batch and is currently working as DM in Gautam Buddha Nagar, apart from this, Suhas LY is a professional player of badminton who won Men’s Singles SL-2 category Silver Medal in Tokyo Paralympics 2021.

at present he is World Ranking No. 2 in Para Badminton. He came into the limelight only after he won the gold medal in the 2nd National Para Badminton Championships 2018. Apart from this, he won the bronze medal in the Asian Para Games 2018 held in Jakarta. Suhas LY was born on 2 July 1983 in Hassan, Karnataka.

He did his primary education in Hassan district, a place called Dudda, after that he did his secondary education in DVS independent college Shivamogga, Karnataka, later he completed his studies from first class division in Computer Science and Engineering Branch from NIT Surathkal in 2004.

Suhas is married to Ritu Suhas, who got selected as Mrs U.P in Mrs. India 2019 contest a PCS officer currently posted as ADM (Administration) in Gaziabad(UP). His daughter Saanvi is 5 years old and son Vivaan is 2 years old. His wife has also been awarded for excellent work in voter awareness in general elections.