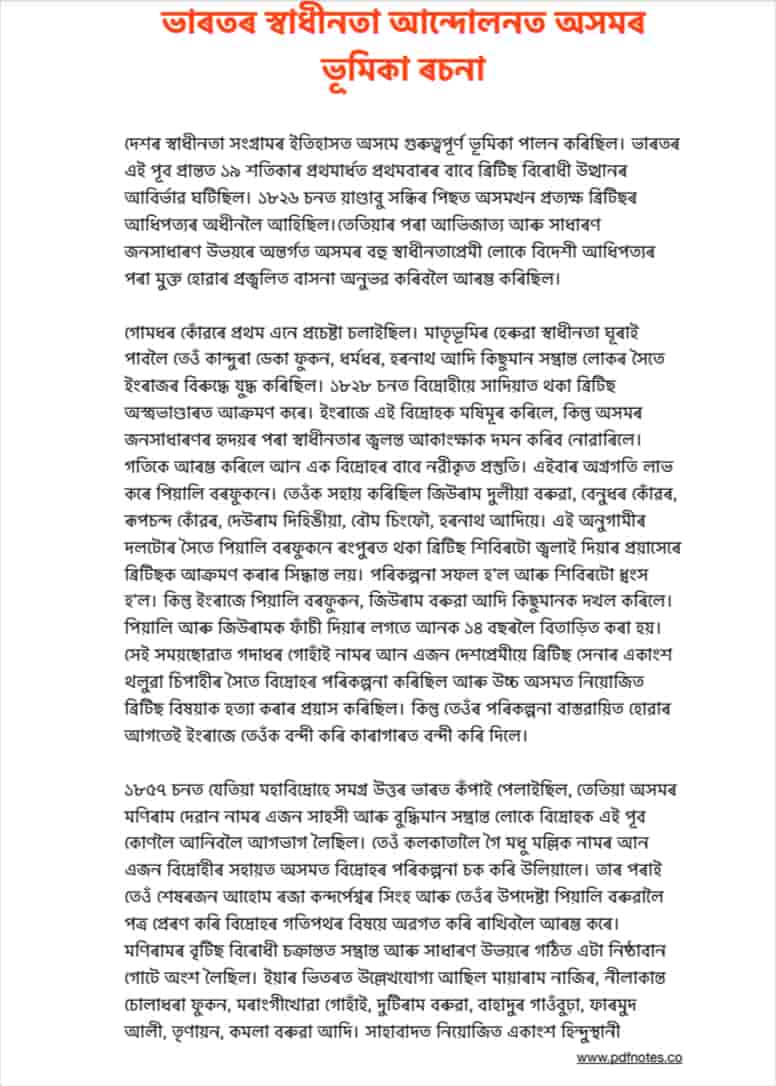 Hello friends, India is celebrating the azadi ka amrit mahotsav this year in the joy of completing 75 years of independence. In which many programs have been organized by the government, along with the Har Ghar tiranga campaign is also going on loudly. As we all know, many sacrifices and sacrifices have been made to get freedom in India and many efforts were made by every state for independence, then we have got freedom.

Programs like Essay Competition Speech Competition Question Forum are being organized in schools, colleges and government institutions, so today through this post I am going to share with you The Role of Assam in the Independence Movement of India Essay (ভাৰতৰ স্বাধীনতা আন্দোলনত অসমৰ ভূমিকা ৰচনা PDF) in assamese language.

Assam has played an important role in the history of the country’s freedom struggle. The anti – British upsurge in the eastern part of India first appeared in the first half of the 19th century . And after the Treaty of Yandabu in 1826, Assam came under direct British dominion. Since then many freedom lovers of Assam began to feel a burning desire for independence from the foreign domination belonging to both the general public and the clan.

Assam has been under the rule of several dynasties among which the Varman dynasty, Koch, Kachari and Ahom are the most prominent ones. During the 13th century, Sukaphaa a Tai prince who belonged to Mong Mao, which is presently a part of China came to Assam crossing the Patkai range along with about 9000 followers and established the Ahom Dynasty in the year 1228.

They A ruled over the state for about 600 years, during which the Delhi Sultanate and Mughals attacked the state 17 times but failed to establish their authority. However, with time the rule of Ahoms had weakened owing to the some internal politics. Assam was invaded by Burma thrice between 1817 and 1826 and during this time Kingdom of Assam (Ahom) came under the control of Burma from 1821 to 1825.

The First Anglo-Burmese War and the Treaty of Yandaboo in 1826 brought an end to the Burmese rile in Assam and marked the beginning of British rule. In the year 1826, British annexed the Ahom kingdom and in 1838 AD, all of northeast India became part of the Bengal Presidency of British India. The rule of the East India Company ended in 1858 and the whole of India came under the direct control of the British Crown.

The assessment of land revenue was increased, and income tax, stamp duties, etc., were also imposed by the new administration and it carried on trade in opium and salt in the State and earned considerable profit thereby. The British discovered that the region of Assam was an implicit goldmine for them and they got into the process of development and progress. The British dissolved the Ahom administrative structure, made Bengali the official language, and recruited Bengali Hindus for various posts instead of the local populace. Coal, limestone, and iron mines were opened and the government offered incentives to European entrepreneurs to start plantations for the production of tea, rubber, chinchona (source of quinine) hemp and jute.

The British brought in contract labor from Bihar, Orissa and Andhra Pradesh. By the turn of the century, one and a half million of such coolies were employed on 700 plantations producing 145 million pounds of tea annually.

There he secretly joined hands with his own sons Harakanta and Haranath, son-in-law Jeuram Dulia Baruah, and many others and made plans to attack Rangpur. But before they were betrayed by one of their associates, Sadiya Khowa Gohain and several members of the group were hanged and others were debarred from country.

Thereafter, the British control over Assam was strengthened. The famous Sepoy Mutiny of 1857 AD, found an echo in Assam under the leadership of Maniram Dewan and Piyoli Barua, who were eventually hanged in 1858 AD. Meanwhile, the British had sought to clamp to linguistic freedom of the natives by introducing Bengali as the medium of instruction in 1837 AD. However it ended in a fiasco because owing to the efforts of the American Baptist Missionaries, and noted intellectuals of the day like Anandaram Dhekial Phukan, Hem Chandra Baruah, and Gunabhiram Baruah, Assamese was reinstated as the medium of instruction in 1873 AD.

Like all other Indian states, Assam as well played an important role in the freedom movement of India. Apart from Sepoy Mutiny, Assam took active part in every movement that led to India to attain Independence.

Kanak Lata Barua, a 15 year old girl became the first martyr of the Quit India Movement in the year 1942 and many others namely Kushal Konwar, Kamala Miri, Maniram Dewan, Bhogeshwari Phukanani etc. also sacrificed their lives for their motherland. Assam’s contribution towards freedom movement of India cannot be ignored.