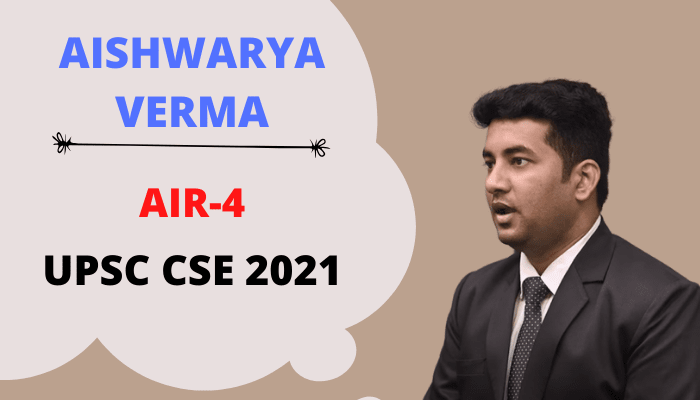 The Union Public Service Commission has released the final result of UPSC 2021 on Monday, May 30. In which Aishwarya Verma has achieved All India Rank-4.

Aishwarya Verma, who hails from Ujjain, has topped the UPSC exam this time by securing All India Rank 4 all over India. Aishwarya Verma, a student of Ujjain, has raised the name of her city by getting the first and overall fourth position in the Union Public Service Commission examination in the male category.

Aishwarya Verma, a resident of Mahananda Nagar, was preparing for the Civil Services Examination by staying in Delhi since 2017. Where he worked hard after staying for 5 years, he finally got the fourth position in the civil service. Aishwarya Verma did her studies till the eighth only by staying in Ujjain and after the transfer of his father Vivek Verma, who was working in Bank of Baroda, Uttarakhand, did his further studies from Uttarakhand.

He did his b.tech from Govind Ballabh Pant University, Pantnagar, Uttarakhand in Electronics Engineering. Only after that he went to Delhi and started preparing for civil services, he was preparing for UPSC since 2017.

While narrating an anecdote, Aishwarya said, “People always teased me for my name. I always tried to explain this to everyone. I thought that after growing up, one day I would come on TV and tell people that my name Aishwaryaa is not Aishwarya. After all, he did what he thought and showed it.

Aishwarya’s father works in a bank and mother is a housewife. He has given full credit for this success to his family. The basic mantra of his success has been told, “Keep working hard and don’t worry about the result.” In relation to his interview, he informed that he was asked questions from Electrical Engineering, Chess, Current Affairs, Geography and Energy Sector.