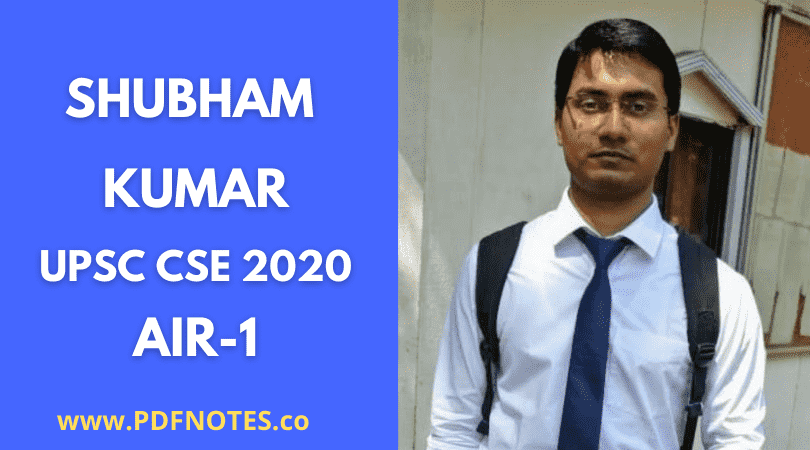 Shubham Kumar, a resident of Katihar district Bihar, has topped the UPSC examination this time in all over India by getting AIR 1 rank, He has raised the honor of not only his family but the whole of Bihar by securing Air-1 rank.

Shubham Kumar did his 10th from Vidya Vihar Residential School Purnia and went to Chinmaya School Bokaro Jharkhand for his 12th studies, later he cleared IIT in which he got admission in IIT Bombay with 219th rank and he passed B Tech with Civil Engineering. During an interview, his mother told that Shubham Kumar was already intelligent and used to be the first in his school.

Shubham’s mind was already in studies, that is why he kept his full focus on engineering studies and after that he also got a chance to work in USA, but due to his lack of interest in engineering, he started preparing for UPSC.

In an interview, his mother told that Shubham Kumar wanted to become an IAS officer since childhood and wanted to contribute to the development of Bihar by becoming an IAS and also told that if he does not get Bihar Cadre then he would like to work for Madhya Pradesh.

Shubham Kumar said in an interview, “I am preparing for UPSC since 2018 and I have seen many ups and downs, further he said that I consider myself very lucky that I have got full support of family as well as support of friends. Even during pandemic, I made my preparations by staying in Delhi.

Mr. Kumar, who is from Bihar, told that this was his third attempt. Having secured rank 298 in 2018, he was undergoing training as an Indian Defence Accounts Service officer in Pune while preparing for the exam and remaining confident was one of the keys, he said.

Shubham Kumar’s father’s name is Devanad Singh and mother’s name is Poonam Devi, there is an elder sister who is working in Bhabha Atomic Research Center BARC. It is being said that Shubham Kumar’s father works in Gramin bank. Shubham’s mother said that since childhood he has managed to secure rank 1 and be among the toppers. She further said that she is very happy that the hard work paid off. She encouraged other aspirants from Bihar to make the state proud. Shubham Kumar told that he wish to work in Bihar for the development of state. If not Bihar, he would like to work for Madhya Pradesh.

Shubham took Anthropology as an optional subject in UPSC 2020.

This was shubham kumar’s third attempt in UPSC exam in which he secured AIR 1 in UPSC CSE 2020. before that he could not even clear his prelims in 2018 while in 2019 he secured AIR 219 in UPSC in which he got selected in Indian Defense Accounts Services IDAS Pune. since then he has been doing training in pune.