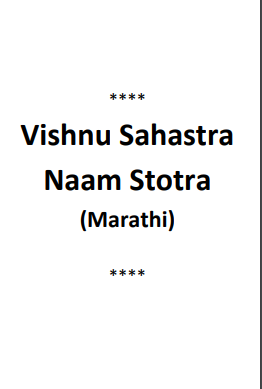 Hello friends, today I am going to share (विष्णु सहस्त्रनामम् स्तोत्रम्) with all of you. Which you can download it from the link given below.

Vishnu Sahasranamam is a Sanskrit hymn that contains 1000 names of Vishnu. Lord Vishnu is Considered one of the main deities in Hinduism. This hymn is written by Vyasa. in the Kurukshetra the stotra was given to Yudhishthira by the warrior Bhishma who was on his deathbed on the battlefield.

Lord Vishnu is considered to be the sustainer of the whole earth. Therefore Vishnu has been given the highest status in Hindu culture. Lord Vishnu is worshipped by all the people of India because it is believed that incarnations of Lord Vishnu are born on earth and respect evils.

By the way, in Hinduism, Brahma Vishnu Mahesh is the most worshipped of all three. Lord Brahma is said to be the creator of the universe and Lord Vishnu and Lord Shiva remove the evils present on the earth.

Benefits and Need of Vishnu Sahasranamam