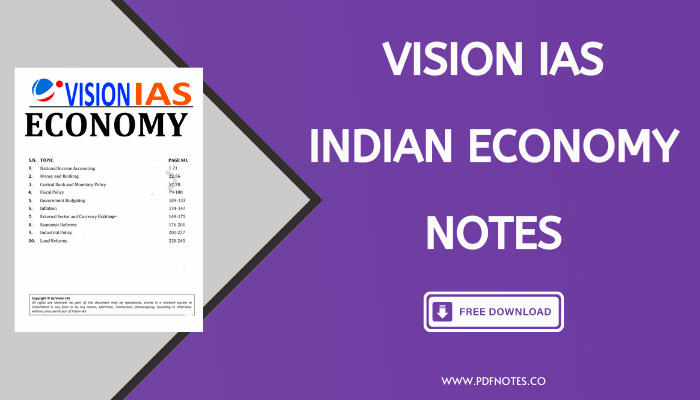 If you are thinking of giving UPSC Civil Services exam this year or next year, then Vision IAS economy notes pdf will play a major role in the upcoming exam for you. Because economics has been considered a compulsory part in UPSC syllabus – both in IAS Preliminary and Main Examination. Whereas in the Mains exam it has been kept as an optional.

These notes are offered by Vision IAS Institute. You can also use them for different exams like State PCS etc. This printed study material is specially designed for UPSC students. In which Recent Current Affairs has also been included which plays a major role in the examination.

What is the economy

The economy of India is characterised as a middle income developing market economy. It is the world’s sixth-largest economy by nominal GDP and the third-largest by purchasing power parity (PPP). According to the International Monetary Fund (IMF), on a per capita income basis, India ranked 145th by GDP (nominal) and 122th by GDP (PPP).

Real GDP is a much better way to calculate the GDP because in a particular year GDP may be bloated up because of high rate of inflation in the economy. Real GDP, therefore, allows us to determine if production increased or decreased, regardless of changes in inflation and purchasing power of the currency.

Primary objective was to boost Indian exports alongside strengthening schemes like Make in India, Digital India, thereby focusing on manufacturing in India along with Ease of Doing business. Key Features

• FTP would reduce export obligations by 25% and give boost to domestic manufacturing.

• FTP benefits from both MEIS & SEIS will be extended to units located in SEZs.

this notes of Vision IAS economy will cover all the important notes of economics like Money and Banking Economic Reforms Government Budgeting Land Reforms etc. download complete pdf from the below section.

•The price of one currency in terms of the other is called exchange rate. It could be defined as the amount of domestic currency required to buy one unit of foreign currency.

•Usually it is defined as the price of foreign currency in terms of domestic currency. This is called the bilateral nominal exchange rate.