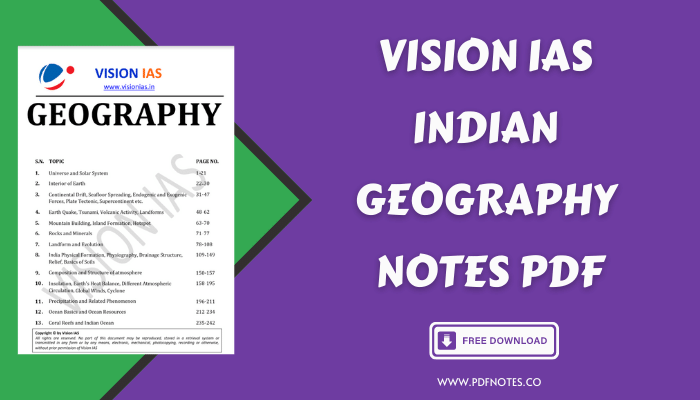 in UPSC Exam Vision IAS Indian Geography Notes PDF will prove to be very helpful for those interested candidates who are preparing for IAS exam, Geography is considered to be a very important subject. The syllabus of UPSC includes India Geography as well as World Geography.

Geography is a compulsory subject in the UPSC syllabus, at the same time it is an interesting subject as well as indispensable because where General Studies is an important part of GS Paper 1 as well as Preliminary paper.

The following concepts in Geography are covered broadly by the UPSC Syllabus:

If you have just started preparing for this exam then NCERT can be an important source for you, because every aspirant should start Geography from NCERT books. Taking notes systematically in the study material for revision proves to be effective. It is often seen that the candidate fails to find the important topics, as well as due to lack of time and resources, candidates are unable to concentrate on the right topics.

The Indian Geography Notes provided by Vision IAS Institute helps the IAS aspirants, as they are written in a systematic manner so that every aspirant can understand it easily.

India is a vast country lying entirely in the Northern hemisphere. The main land extends between latitudes 8°4’N and 37°6’N and longitudes 68°7’E and 97°25’E (figure 1). The Tropic of Cancer (23° 30’N) divides the country into almost two equal parts (figure 2). The southern part of the country lies within the tropics and the northern part lies in the sub-tropical zone or the warm temperate zone. This location is responsible for large variations in land forms, climate, soil types and natural vegetation in the country. To the south east and south west of the mainland, lie the Andaman and Nicobar islands and the Lakshadweep islands in Bay of Bengal and Arabian Sea respectively. Andaman and Nicobar islands make southern boundary of India Union at 6°45’E in Bay of Bengal. The southernmost point of the India Union “Indira Point” got submerged under the sea water in 2004 during the Tsunami.

The land mass of India has an area of 3.28 million square km. India’s total area accounts for about 2.4 per cent of the total geographical area of the world; whereas it sustains17.5per cent of the world population. India is the seventh largest country of the world. India has a land boundary of about 15,200 km and the total length of the coast line of the mainland including Andaman and Nicobar and Lakshadweep is 7,516.6 km.

India is bounded by the young fold mountains in the northwest, north and north east. South of about 22° north latitude, Indian Landmass begins to taper, and extends towards the Indian Ocean, dividing it into two seas, the Arabian Sea on the west and the Bay of Bengal on its east. The Peninsular shape of India makes climate of southern India differ from that of Northern India. Vast sandy expanse of Marusthal in Rajasthan and marshy great Rann of Kachchh make western boundary of the India.