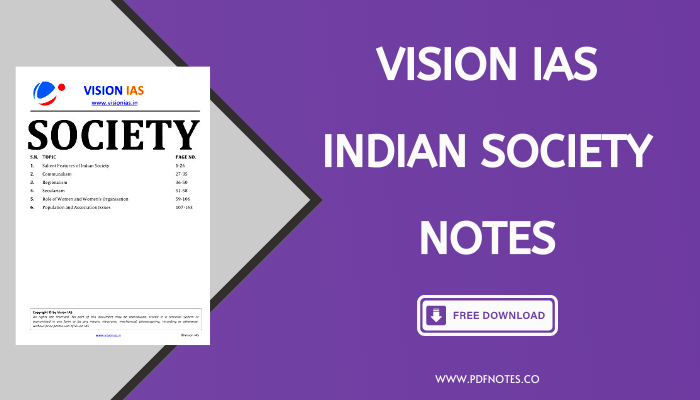 Indian Society is a very important subject in the syllabus of UPSC. Because the topics of this subject are also seen in UPSC IAS Prelims and Optional Subjects. Through this article, I am sharing with you Vision IAS Indian Society Notes PDF, which will help you a lot in your UPSC preparation.

Indian society is the greatest example of multi-ethnic, multicultural, and multi-ideological constructs that co-exist, at once striving to strike harmony and also to retain its individuality.

Based on the generous concept of Vasudhaiva Kutumbkam (the world is one family), Indian society possess a great cultural heritage. During the course of its evolution, it has accommodated and integrated many communities and their ways of life from time to time.

Aspirants preparing for UPSC know that, the detailed syllabus is not mentioned anywhere for prelims by UPSC but there are some topics from which questions can be asked, one of them is Indian Society subject.

Talking about the Mains paper, Society is a part of GS Paper 1 but it has also been included in General Studies Paper 2 in some aspects.

Due to which the candidate does not know where to study, through the notes given below, you can get a good guidance that which topics are important for you on which you need to focus.

Vision ias notes of indian society are very helpful for prelims as well as mains exam try to make short note of these printed material so you can revision at the time of exam.