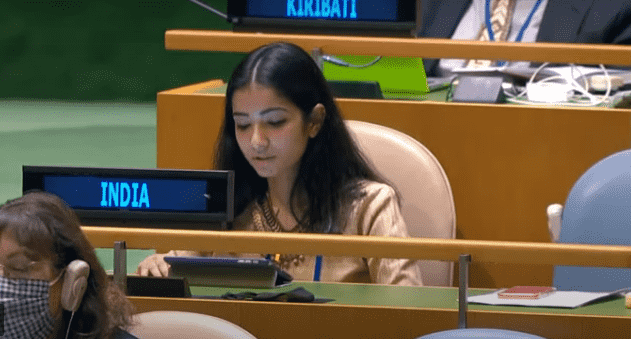 As you know that IFS Sneha Dubey is India’s first secretary at the United Nations. She was born in Goa, india. Currently she is working in united nation as a secretary. Sneha is 2011 batch ifs officer. she completed her schooling from Goa. After completing her higher education from pune she did her MPhil from JNU delhi.

She appeared for upsc civil services exam for the first time in 2011 and she got selected for Indian foreign services in that first attempt. Sneha’s first appointment was in the ministry of external affairs. after that in 2014 she was sent to indian embassy in Madrid. And she is currently representing India as a secretary in the United nation.

“This is the country that is an arsonist disguising itself as a firefighter. Pakistan nurtures terrorists in their backyard in the hope that they will only harm their neighbours. Our region and the entire world, has suffered because of their policies. On the other hand, they are trying to cover up sectarian violence in their country as an act of terrorism”” said Sneha Dubey.

Sneha Dubey has righty exposed Pakistan. Pakistan’s ties with terrorism are not new to anyone. As a nation they support them. Osama bin Laden was shielded by the country and given home. They treat him like a martyr. India supports Sneha.

Watch the full video of Dubey’s response at UNGA