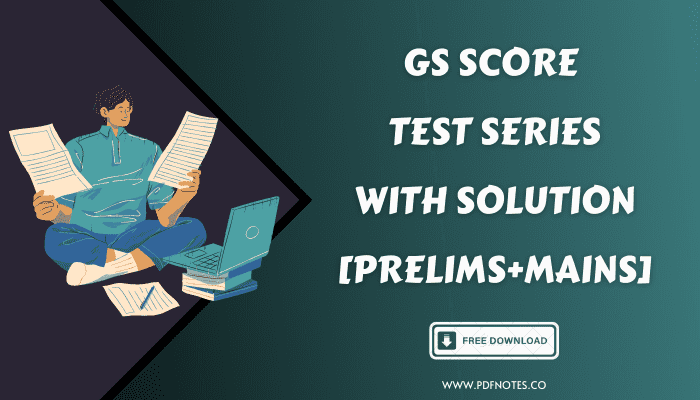 GS Score Test Series 2023 PDF Prelims & Mains is very useful for those students who are preparing for the UPSC exam. it will cover polity, economy, and revision tests.

The GS Score test series covers vast areas of both static and current parts. Apart from this, the topics are explained in detail in the questions as well as the solution pdf. Prelims test will help you to score more in the exam.

These test series cover each and every topic in detail from authentic and primary sources along with UPSC Prelims Syllabus to give you a deeper understanding of the nature of Prelims preparation.

Q. Which of the following best characterizes a ‘Republic’ state?

(a) The state has its own independent authority and it is not a dominion of any other external power.

(b) The state’s government gets its authority from the will of the people expressed in an election.

(c) The head of state is elected by the people.

(d) The Constitution of the state is supreme and immutable.

Q. Which of the following was/were features of the Government of India Act 1858?

1. It abolished the Board of Control and Court of Directors and ended the system of double government.

2. It separated the executive and legislative functions of the Governor-General’s council for the first time.

3. A new office of the Secretary of State for India was established with complete authority and control over the Indian administration.

Select the correct answer using the codes given below:

1. Only Parliament can make laws that prescribe residence as a condition of employment in a state or union territory.

2. Human trafficking is a subject in the Concurrent list, and thus both the Centre and State can make laws prescribing punishments for the same.

Which of the statements given above is/are correct?

Q. Which of the following statements regarding the Right to Equality is incorrect?

(a) Rule of Law indicates different treatment in different circumstances.

(b) President of India has immunity to getting no criminal proceedings instituted against them during his tenure.

(c) The concept of ‘equal protection of laws’ has been taken from the American Constitution.

(d) A Member of Parliament is not liable to any proceedings in any court in respect of anything said by him in the Legislature.