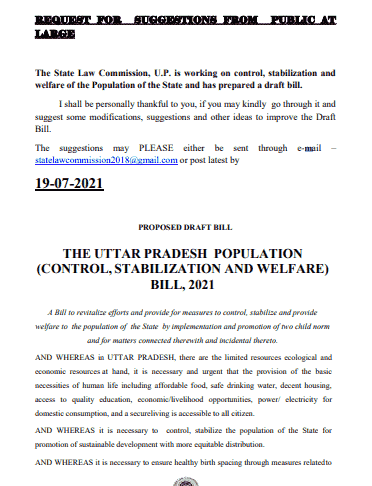 The Uttar Pradesh government has put out a draft proposal of population control bills. In the bill, the state government seeks to bar anyone violating two-child policy from contesting local bodies polls, from applying for or getting promotion in government jobs, and receiving benefits of welfare schemes.

It has been prepared by the chairman of the State Law Commission, Justice Adityanath Mittal. If this draft is changed in the law, then in future those who have more than 2 children in UP will not get government jobs. Such people will never be able to contest elections.

They will not get the benefit of government schemes. The Law Commission claims that the entire system is being affected due to uncontrolled population. The commission has sought public opinion on the draft by July 19. Earlier, the draft of Love Jihad Act was also prepared by Adityanath Mittal.