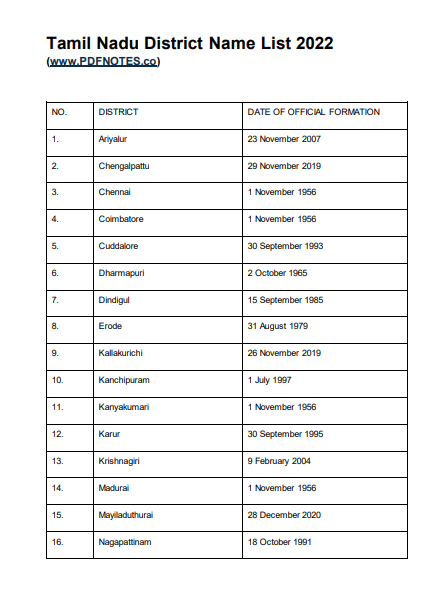 Hi, readers today we are going to share with you all the complete district name list pdf (தமிழ்நாட்டின் மாவட்டங்கள்) of Tamil Nadu state. it is a state in southern India and its capital is Chennai. Tamil Nadu borders the Indian Union Territories of Puducherry and Karnataka, Kerala, and Andhra Pradesh, as well as along the international maritime border with Sri Lanka.

There is a total of 38 districts in Tamil Nadu till 2022. According to the 2011 census, the total population of Tamil Nadu is approximately 7,21,47,030 and its area is 1,30,058 km. The economy of TN is the second largest economy of India with 21.6 trillion GSDP. Tamil Nadu is the largest Indian state in India by area and the largest state by population.

The Tamil language is mostly spoken in Tamil Nadu, while apart from this, the English language has been declared as an additional official language for the purpose of communication. Tamil was the first language recognized as a classical language of India when India adopted the national standards.